Ode to the pork pie that never was 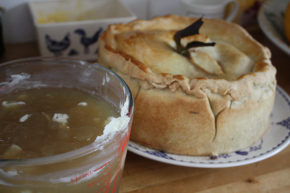 Deconstructed pork pie - sadly the jelly never made it inside the pie's crust.

Now that a week has passed, I’m about ready to write about the tragedy that was my pork pie. It was an ambitious project…and I could have pulled it off. But I didn’t.

Don’t let this put you off though – I know exactly what went wrong, and I want you to learn from my mistakes, so that when you come to make this little beauty, it’s nothing but perfection.

There were two contributing factors to the pork pie’s collapse: impatience and over-excitement. I’m not going to lie – when you’re creating a pork pie, it’s hard to curb these two animal emotions. So my first two tips are to leave lots of time, and also to adopt the right mindset. Perhaps do some yoga beforehand, or put on some calming music – anything to keep you in a composed, meditative state.

Now, you’re not going to be able to find all the ingredients at your local Tescos, but don’t let this put you off.
Speak to an actual butcher – they’re really nice, and they’ll be able to scout out all the cuts for you, which are, incidentally very cheap. Bonus.
So, here’s everything that you’ll need:

Ingredients
For the Stock
A few pork bones
A pig’s trotter or a very small hock
1 onion, halved and studded with six cloves
A stick of celery, chopped in half
Six black peppercorns
Parsley, thyme and bay leaves
Roughly 2 litres of water

The first step with a pork pie is to create the jelly.
You’ll need to do this a couple of days before you plan to feast on the pie, so organisation is key.
It’s pretty much identical to making a stock…only you chuck in a trotter or two, and this amazing thing happens-the collagen breaks down, and turns into gelatin, which is the main ingredient of an old school jelly – it’s terribly exciting.

Just to clarify, at this stage you’re chucking all the ‘stock’ ingredients in a big pan, then gently simmering for at least three hours.
Strain out all the left over feckle, bones and other solids and then pour the delicious juices into a jug which, when put in the fridge overnight, turns into jelly.

Next is the pastry. One of the first things you have to do is try to expel anything you’ve been told about pastry-making from your mind, because the method for pork pie pastry is very different to your standard short crust.

Melt the butter and lard with the water over gentle heat.
If you were being spoiled (as I was) by having access to a Kenwood chef, then attach the K-shaped beater. Gently mix the flour, salt and eggs. Once it has started to come together, add the buttery-watery-lard very slowly-after a minute or so, the pastry should have naturally formed a ball.

If you’re not lucky enough to have access to a Kenwood chef, then mix everything in the same order in the way you usually would with handmade pastry – cut it together with a knife, and then use your hands to bring the pastry together in a ball.

Wrap the pastry in cling film, and then pop it in the fridge while you conjure up the juicy, meaty filling.

I used scissors to cut up the bacon into tiny pieces. Then I diced the pork shoulder into 1cm squared cubes. This was quite time consuming, but also very satisfying.
Put the bacon and the pork shoulder in a mixing dish, then add the minced pork belly, thyme, pepper, sage and a teeny weeny bit of salt (though be careful, because bacon really is notoriously salty anyway, and it’s a lot easier to add salt rather than take it out).

Now, take the pastry out of the fridge, and roll out 2/3 of it into a square.
The pastry should be nice and springy, so you shouldn’t have any problems with it disintegrating or behaving in an annoying fashion like a very short, shortcrust pastry.
Try and nail your rolled square first time though. When I scrumpled it up and tried to roll it out a second time, the pastry lost its elasticity, and was suddenly quite uncooperative.

I found that quite a deep, 18″ cake tin worked perfectly for the amounts in this recipe.
Whizz round the sides of the tin with some old butter paper so the pastry won’t stick.
Next line the cake tin with the pastry, and then tip in your meaty filling.

Roll out the final 1/3 of the pastry for the lid, and using very slightly wet hands, crimp together the sides and the top. Finally, stick a bay leaf in the lid to create a hole which will stay open during cooking, and brush the top of the pie with an egg yolk.

By the end of cooking, my pie was looking like the most handsome thing you’ve ever seen. Oh, never have I experienced such maternal pride at the sight of this wonderful, porky baby.

But our time together was to be short-lived, because this was the moment where things started to go wrong.
The instructions I was following told me to brush the whole pie with egg yolk, and give it a final ten minutes in the oven so that the outside turned golden.
I loosened the sides of the cake tin, and pushed the pie out, so that it was sat on the base. I could (and should) have quite easily brushed just the sides of the pie, and left the bottom alone. So why, oh why then did I decide that the base of the cake tin should come off too?
With the pie weighing quite a lot, and the pastry base being warm and supple, and a little bit damp from the meat juices, when I tried to slide the pie off, the base stuck and the rest of it moved, detaching the top of the pie from the bottom, and flooding the kitchen floor with meat juices.
There was a motionless twenty seconds where we just stood and stared – interrupted only by the steady drip of meat juice onto the floor tiles. Then Tom and Andy jumped into action, ushering me out of the room, away from the scene of devastation, and pouring me a large gin and tonic.

Disaster strikes as the bottom falls off and the insides fall out - shame.

For a pork pie to be a pork pie, it must have a jelly layer between the meat and the pastry. Without a tightly sealed pie to pour the liquid jelly in, it’s impossible.
The plus side of this story is that the pie was devoured as a ‘meat pie’ rather than a ‘pork pie’ - everyone generously told me that they didn’t like the jelly part anyway. Such good friends.

Hopefully by this point, you will have learned from my mistakes though, and as you are reading this part of the recipe, you’re sat next to a proud, in tact pork pie. So, I shall instruct you on how to finish the recipe.
Wait for the pie to cool, then remove the bay leaf – if you do this while the pie is still hot, then it might spew hot meat juices up through the hole, which would discolour the pastry lid and be a great shame.
Now, heat up 250ml of your porky jelly so it turns back into a liquid. Using a funnel, pour through the hole in the lid, and then put the pie in the fridge overnight, so the liquid-jelly has a chance to cool and set.

Finally, create a haiku to celebrate your pork pie, invite all your most carnivorous friends round for lunch, and add the achievement to your CV.

2 thoughts on “Ode to the pork pie that never was”