As a blogger you get sent some extraordinary press releases.

Recently lots of them have been tenuously linked to the Duchess of Cambridge. I’ve been sent ‘recipes for a right royal baby shower’, told that lavender biscuits are all the craze since Catherine ate them to help with morning sickness, and that “jam making is back in vogue” once it emerged that the Duchess of Cambridge “loves to make fruit jam at home while she’s waiting for Prince William”. Sorry - ‘at home waiting for Prince William‘ - apparently women’s lib never happened.

There’s Bacon Connoisseur’s Week, National Cupcake Week, Egg Week and a recently-announced Hamburger Day. Ironically, as soon as an ingredient is awarded a special day I can’t help but become suspicious of it. What’s wrong with the food if it requires a whole marketing team  to persuade people to eat it?

Today though, I got an out-of-the-blue message from people at Tuscany Now. They’ve embarked upon a rather lovely project of logging people’s ‘hidden secrets’ on a map of Tuscany. Being a big fan of both collecting and sharing tip-offs, I added a little review of Castello del Trebbio - a memorably good (€30) five-course taster meal I came across, hidden in the Tuscan hills. Anybody can leave a review, and if you do, then you’re entered into a draw to win some Tuscan wine (yum) or a holiday.

The Tuscany Now team are also running a competition for bloggers to write about any sort of hidden gem they’ve stumbled across - from anywhere in the world. Generally, I try and avoid product competitions in an effort to maintain the integrity of my blog. But a few lovely people who read The Food I Eat have got in touch in the past to ask for recommendations. And I’ve certainly asked for recommendations from lots you out there too, so I thought that it would be a good opportunity to share hidden gems, because the little tucked-away beauties are usually the best.

Here are eight of my favourites. Please do use the comment section at the bottom to share yours.

I always feel sorry for the tourists waiting in the rain outside Madame Tussauds, lined up alongside The London Dungeon, and exchanging their hard-earned cash for We Will Rock You tickets. But when I’ve been to Paris in the past, I suddenly empathise with them.
The city can be intimidating, and it’s hard to know where to start. But deep in the Latin quarter, down a dark alley, through an unmarked door is a beautiful cocktail bar, which will make you feel like a true Parisian. Not just a ‘true Parisian’, but a truly hipster Parisian.
While glass frames of taxidermy line the bar back, jars of fresh garnishes line the bar front. Curio Parlor is a serious cocktail joint, serving beautifully-balanced tequila cocktails right through to frosted lowballs filled with dangerous cognac cocktails. It’s the perfect place to start the night. It’s the perfect place to end the night. Dammit, if I could cope with the levels of spirit-consumption, it’d be the perfect place to spend the whole night.

A friend of mine had her wedding reception at Tayyabs. And honestly, I’d do the same, it’s that good. Look beyond the inevitable queues (they flip the tables fast). Look beyond the lino floors and wipe-clean banquette seating. Look beyond the slightly dingy location - and instead, focus on the sizzling trays of spiced meat emerging from the kitchens. From the most tender lamb chops to crispy pakora and beautifully-spiced saag aloo, it’s the dreamiest Indian food I’ve ever eaten. Coupled with the fact that Tayyabs still has a ‘bring your own booze’ policy, and also that I’ve never spent over £15 - and have never left hungry - it’s a true East End gem.

Copenhagen is something of a food lover’s destination. But with the big players like Noma coming in at £200 per head, it was a joy to discover that there were some wonderful - and more reasonably priced - options available for mere mortals.
Manfreds is a small neighbourhood restaurant. If you go just as a couple, then grab a perch at the bar, so you can watch the chefs in the open kitchen work their magic throughout service. The food comes in the form of lots of small plates. It’s typically Norwegian, in that the emphasis is on good ingredients cooked well - but simply. Bitter chicory alongside sweet braised shallots, salty anchovy emulsions and bold dishes like ox tatar. The wine is similarly punchy, with an ‘all-natural’ selection making for unpredictable drinking. A ‘Chef’s Choice’ menu, consisting of seven small dishes to share, comes in at around £30 per head.

Afternoon tea is a thoroughly British affair. So it’s no surprise that a high tea with full pomp and ceremony can set you back £50. If you’re happy with something a little more informal, but just as charming, then The Modern Pantry is a great option.
Sit in one of the bright and airy dining rooms, or outside in the square - nestled between Georgian townhouses, The Church of Saint John, and the remains of the city walls. As the name implies, The Modern Pantry’s specialty is the ‘modern’ twist on a classic. While the tea selection is expansive, and the crockery is beautiful china, expect the scones to be laced with matcha tea, and the cucumber sandwiches to be replaced with something a little more racey.

This neighbourhood cocktail bar is nestled away down a leafy residential street off South East Berlin’s Oranienstrasse. Far from the concrete techno clubs, this is an old-timers bar. In a former life it was a chemists, and the back bar is still lined with apothecary cabinets. But now the bottles are filled with a different kind of medicine.
The glass ceiling, wood panels and chandelier lighting help create an old world feel. The fact that smoking is not only allowed - but actively encouraged - all adds to the smoky vibe, reminiscent of a bygone era. Locals and regulars prop up the bar for an after-work drink, and plate or two of tapas. It’s the perfect way to slip off the tourist’s track and fall into a day-to-day Berliner’s world. 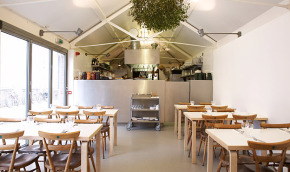 This is a hidden gem in that it is, quite literally hidden - behind a brick wall, and disguised as a school. But if you can track down Rochelle Canteen in amongst the Quaker, red brick buildings of Arnold Circus, then you really have stumbled upon a gem.
The restaurant is located in the converted bike shed of an old school, with tables tumbling out onto the schoolyard on a sunny day, where customers can borrow one of the straw sunhats available, and bask in the afternoon sun. The restaurant is run by Margot Henderson - the wife of legendary restaurateur Fergus Henderson, who has been attributed with the revival of traditional British cuisine. Unsurprisingly, the food at Rochelle Canteen follows a very similar theme, with generous portions of seasonal British classics - think terrines, deep fried rabbit, lemon sole, plum cakes and Eton mess. As Rochelle Canteen is in a residential area, it’s only licensed to open for lunch from Monday to Friday, and runs a bring-your-own-booze policy, with £5 corkage.

Hidden down a little side street, and is tucked round the corner from the main drag of restaurants, La Cuchara is certainly an understated little bar. Unlike the other pintxos joints which display their wares on the counter tops, you have to order off the blackboard - easier said than done when the proliferation of ‘x’s in the Basque dialect make it hard to pronounce, let alone understand.
The good news though is that I didn’t eat a single thing which wasn’t completely and utterly, mind-blowingly delicious, which makes mystery-ordering a little less of a lottery. Sticky, slow-cooked meat; smeary, black squid ink risotto; rich and bitingly dark chocolate torte - all accompanied with tumblers and tumblers of Rioja. Worryingly, there are no prices alongside the dishes on the blackboard, which does make ordering seem arbitrary and somewhat terrifying. But the bizarre thing is that both times I went there, I ate and drank until I could eat and drink no more, and the bill never exceeded £20.

A good butchers is hard to find. Particularly in London, where there’s very little in between the high-end Allen’s of Mayfair types, and the Bethnal Green Road butchers whose meat has a very bad habit of shrinking to half the size, no matter how carefully you cook it. New, middle-ground places are starting to pop up about the city though, and The Butchery is one of these gems.
The Butchery at Bermondsey is a bit of a trek - hidden away under a railway arch off Dockley Road. To make things even trickier, it’s only there from 9am-2pm on Saturdays. But if you’re planning on making an occasion of a Sunday roast, then it really is worth a trip. Crammed with hulks of beautifully-aged, marbled and reasonably-priced cuts it’s a carnivore’s dream. Neighbouring railway arches sell cheese, beer and ice cream, which helps make the trip even more worthwhile.

I’d love to know some of your hidden gems. If you’re happy to share, then please tell me a little about them in the comment box below.