Like nearly 4 million other Brits, I was glued to the quarterfinals of The Great British Bake Off last Tuesday evening.

Who would have thought that watching four women grapple with iced buns, wrestle croissants into shape and take on the art of patisserie would be so compelling?

Well, I certainly wasn’t alone. “A perfectly risen melange of stately homes, sun-dappled lawns and Cath Kidston kitchens” exclaimed Tom Parker Bowles. “It is redolent of a mythical Albion of village fetes and Victoria sponge, a place where, in the words of John Betjeman, ‘all the world goes home to tea and toast’.”

And go home to tea he did. Parker Bowles went on to explain how, like many other Brits, he’d been inspired to do a spot of baking, so had made a dozen cupcakes with his daughter.

If only I’d started small with a dozen cupcakes too. But all the food theatre and elaborate baking goaded me into starting big instead. I thought that if the ‘amateur’ contestants could sculpt layered mousse sponge cakes, then being an ‘amateur’ chef myself, I could too.

I set aside Saturday afternoon to faff around with genoise sponge (“technically challenging” and “one of the most difficult to pull off” according to The Great British Bake Off) and gelatin (my own personal nemesis).

And what did I learn? That genoise sponge really was very tricky indeed, and that gelatin really is very temperamental.

One of the professional bakers on the programme said that “in the old days, the most important thing for the patisserie client was what the cake was going to look like – they didn’t even start to think what it was going to taste like. That’s a huge revolution now – people want the dessert to taste as good as it looks.”

…so, I figured that my cake was a sort of nineteenth century specimen. It looked rather impressive…but it did taste…well…a bit hard.

Recipe based on this.

Preheat the oven to 200C and grease your cake tin with a bit of butter.

Put the eggs and sugar in large bowl and hover it over a bowl of only-just-simmering-water. Don’t let the bottom of the bowl touch the water. Beat with an electric whisk until the mixture is thick and fluffy then remove it from the pan and beat for about three more minutes.

Stir in the melted butter, then fold in the sifted flour using a large metal spoon. Pour the mixture into the cake tin and bake for 25 minutes. Let the sponge cool entirely and then cut in half.

Meanwhile, make the mousse. Place 125g of the raspberries in a bowl with the icing sugar and a squeeze of lemon juice. Stir gently until the sugar has dissolved then set aside.

Mash the remaining raspberries with a fork, until they’re pulpy but not completely smooth. Place the crushed raspberries in a small saucepan with the caster sugar, heat gently until the sugar has dissolved then remove the pan from the heat. Squeeze the water from the gelatine and add it to the pan, stirring until it has completely dissolved, then mix in the whole raspberries.

Transfer the mixture to a bowl and set aside to cool. (You could place the bowl over iced water to speed up the cooling process.) When the raspberry mixture is cold and starting to set, whisk the cream until it forms soft peaks then gently fold it into the raspberries.

Use half of the sponge as a base. Put the edge of the cake tin (with the base removed) round the base sponge, and then put the mousse mixture on top. If (like me) you want some extra prettiness, then halve some strawberries, and arrange them round the edge facing outwards before you scoop the mousse into the middle.

Dust some icing, and (or) arrange some fruit on top which can be glazed by coating it with a little bit of jam and boiling water. 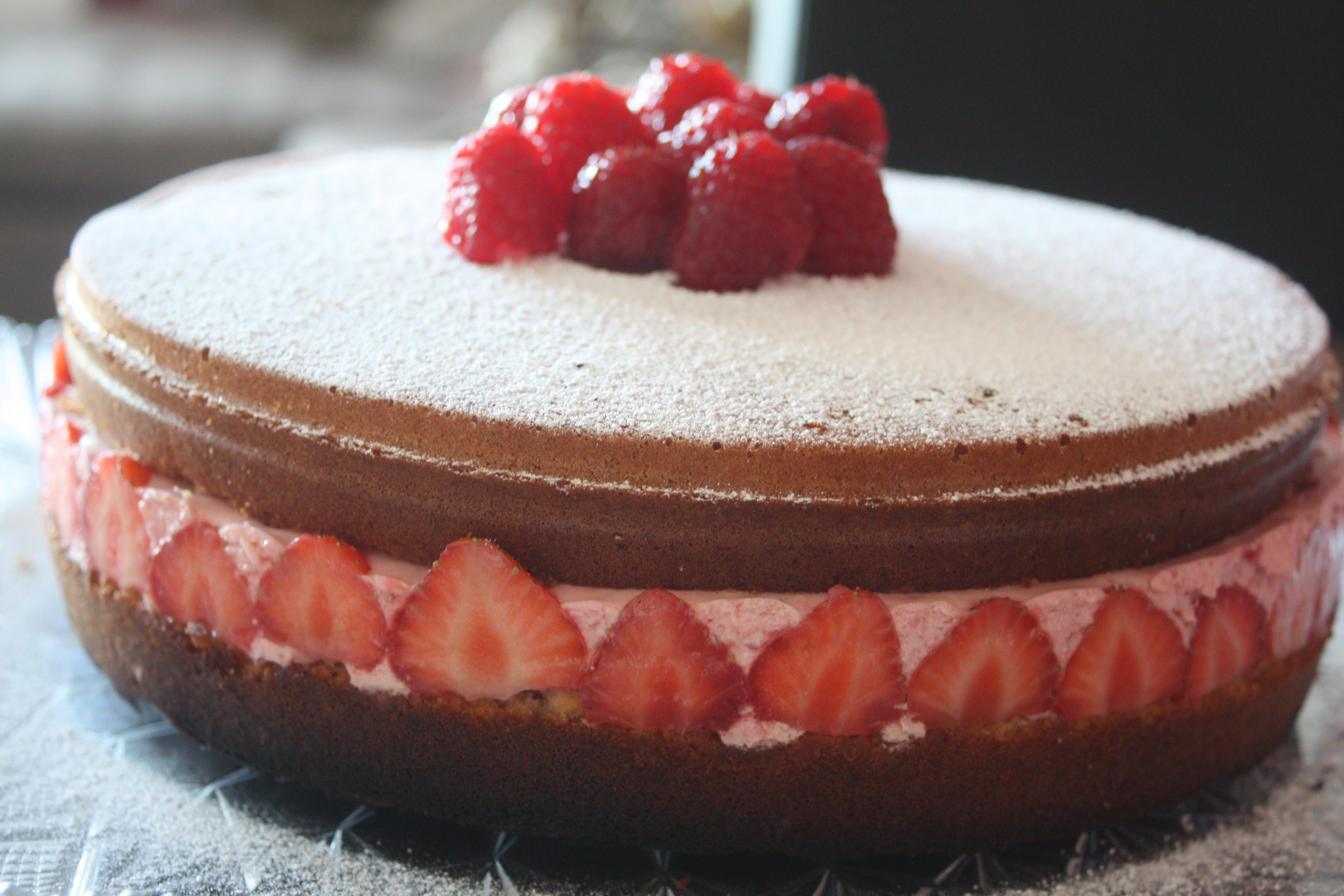