Do you stick with British tradition, and follow dessert with a nubbin of stilton and a mouthful of port? Or do you follow our French neighbours who, despite just being 21 miles across The Channel, dine in a different order? …

END_OF_DOCUMENT_TOKEN_TO_BE_REPLACED

I wonder who came up with the idea of bubble and squeak: Tear off any meat that’s still on the bone from leftover Sunday roasts. Chop and shallow-fry any leftover sprouts or cabbage, (trying not to blacken too much.) Finally, mash everything up with a lump of potato. Not really the kind of thing that triggers involuntary salivation….

END_OF_DOCUMENT_TOKEN_TO_BE_REPLACED 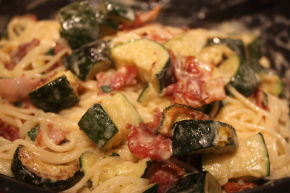 Making macaroons (or meringues or pavlova) means one thing: lots of left over egg yolks.

It is possible to freeze them. There’s a problem with that though – it means that at some point you have to defreeze them. When I’m rooting about in my freezer I often get inspired by some nice fruit or cut of meat that I forgot was there. I can’t imagine coming across a pot of egg yolks and getting excited though.

It’s best to use the yolks up as soon as possible – but then what to do with them? I suppose there’s mayonnaise or lemon curd or crème brulee. Seeing as it was a Thursday night though, I figured that carbonara might be a lot more practical, especially as I happened to have ends of crème fraiche, cream and bacon that needed using up.

Have a go – it’s a real crowd pleaser….when I made it, the boyfriend wolfed it down in about 2 minutes, and declared that “my cooking’s getting better” – quite the compliment!

Start off by cutting the courgettes into chunks, and the bacon into strips. Toss the courgette in oil and grind lots of pepper over it all. Pop the strips of bacon and courgette into a baking tray, and put it into the oven at 200°c

Add the egg yolks, parmesan and lots of pepper to the creamy mixture, and put it in the fridge until you need it.

When the courgette has turned darker, and the bacon is nice and crispy, take it out of the oven.

Boil some water, and put the spaghetti in only when it’s bubbling furiously (otherwise it’ll stick together). Cook the spaghetti to the guidelines on the packet.

Hello – I'm Rachel Walker – food writer and cook. I live in East London with my tolerant husband who is often alarmed to find pig trotters or brining lamb tongues floating in the fridge. Read more about my culinary adventures by clicking here →

All In Bad Taste