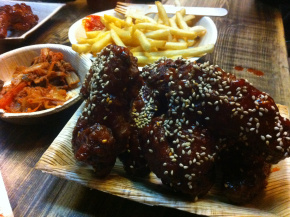 Loyal Lucky Peach subscriber? Popped over to Copenhagen’s MAD Symposium last weekend? Counting down the days to the opening of the UK’s first Williams-Sonoma? Well, the chance is that you’re the sort of hard-core foodie who’s more likely to idolise David Chang than David Beckham.

The American chef is the godfather of Korean fusion. He was brought up in Virginia on a diet of “Korean food and then Waffle House-like Southern things on weekends”. After spending his adolescence on the golf circuit often pitched against a young Tiger Woods, Chang moved into cooking, opening his first restaurant in NY’s East Village: Momofoku Noodle Bar.

The menu brought together Korean classics, with a playful American twist. He describes his signature steamed pork buns as being “like steamed hamburgers” - perhaps explaining how he shifts upwards of 3,000 per week in burger-hungry NYC!

As Momofuku built up a cult following, Chang started expanding his empire to include more destination diners, each aiming at a slightly different audience - from the Ssam Bar to the Milk Bar and Michelin-starred Ko. He also wrote New York Times bestseller Momofuku, and somehow found the time to launch the food journal, Lucky Peach.

Perhaps the distinctiveness of Chang’s dishes are that they don’t take themselves too seriously. In a market where people are often derisive of ‘fusion’ cuisine, his recipes have a real wit. A tongue-in-cheek irony which firstly endeared him with critical NY hipsters, and then food critics far-and-wide. From Momofuku Milk Bar’s ‘cereal milk’ (milk infused with sweet, toasted cereal) to the ‘crack pie’, volcano rolls and Momofuku’s crispy chicken wings, the dishes take a Korean concept, and moulds it in a way which seems to makes it a guaranteed-hit.

Now, there’s a theory out there that American food trends trickle Eastwards, arriving in Britain about three years later (take the cupcake craze, the burger craze, the American BBQ craze, cocktails, street food etc). According to this theory, we were a bit late on the pick-up on the Korean craze. Until recently, Britain could do Chinese, it could do Japanese - but there was very little out there on Korean.

Then suddenly, an explosion: Asadal, Kimchee, Koba, Bi Bim Bap, Assa, Woojung, Dong San - and all those just within about a half-mile radius in Soho. All pumping out dolsots and broths, rice and pickles. But serious, grown-up, authentic, Korean food. Not light-hearted fusion.

….and then along came Jubo - carefully combining Londoner’s enthusiasm for Korean cuisine with with Chang’s informal, hipster, fusion-style.

The restaurant is the brainchild of Lyall Schwass and Leon Foong. Until recently, Schwass was working in consultancy, and Foong was at Saatchi & Saatchi. Both met on an MBA, and used their business nous to find and fill a gap in London’s restaurant market. After a block of time spent “researching” in New York, they returned to London, and chose Rivington Street (flanking Old Street and The City) as the site to launch Jubo, which loosely translates as ‘Korean Canteen’.

Now, Rivington Street is quite a swanky part of Shoreditch. The west end is home to the (fairly arrogant) cocktail bar Calloh Callay, chichi Rivington Grill and Mark Hix’s Tramshed. Jubo is the east end of the Rivington Street though. Opposite Cargo, which attracts glistening, pale ravers, rather than the slick and suited at Tramshed.

Garlic and Soy Strips. Crispy, juicy, delicious - our favourite thing on the menu.

Jubo is in the side room of a discreet pub called ‘The Bedroom Bar‘. I must have walked past The Bedroom Bar a hundred times, and never noticed the windowless joint - barely advertised, except for a half-hearted blackboard outside the door. So I was surprised to find a friendly, relaxed, live-mic atmosphere. It’s a dingy, neon lit place, but unlike some of the smart and brisk bars nearby, you feel immediately welcome. No airs and graces, but slick and smiling service.

Jubo’s website plugs the ‘Korean Canteen’ angle of its name, which is perhaps a little misleading. To me, ‘canteen’ implies a minimalist, utilitarian, Wagamama-feel. Jubo is far better. The room contains several little tables, perfect for small groups. There’s a kiosk-style service hatch pumping out food in the corner. And beer is certainly the recommended accompaniment to the dishes, instead of the green teas or power juices - or whatever it is you’re encouraged to drink at Wagamamas.

The pork buns were good. But I had an exceptional pork bun at Yum Buns recently, so it didn’t blow my mind. What really were dreamy though were the plates of strips and wings, either in a ‘hot and sweet’ gochujang marinade or soy and garlic marinade. Crispy from double-frying, but hot and sticky from the sauce. Tom (fresh from work) shamelessly flung his tie over his shoulder - like a Dad washing up - and tucked in to the juicy wings and thigh strips with great gusto.

At just £10 for a lovely, light, Korean Hite beer, two (huge) wings and two (huge) strips, I think that Jubo have come up with something very clever. Unlike lots of other cities, it’s hard to get Londoners to eat and drink simultaneously - when the pub culture is just designed for drinking. But this is reasonably-priced, generously-portioned, stomach-lining food for the start of the night, and booze-absorbing food for the end. Not only that, but it’s flipping delicious. You wouldn’t have to twist my arm too hard to get me to spend my entire evening at Jubo either - happily knocking back some Hites, or kick-starting with the 2 for 1 happy hour cocktails (4-7, Tues-Fri).

Schwass and Foong might not exactly be innovators with the format they’ve come up with. But by successfully replicating some of the bits of Chang’s winning formula, and setting up in the right place, at the right time, I predict that they’re going to do very well. And if not, Tom is threatening to single-handedly keep them afloat with his big plans to revisit for more Hite and chicken strips some time very soon….

Jubo officially opens on 6th September, but is currently up and running, and won’t turn away any hungry diners who drop by.