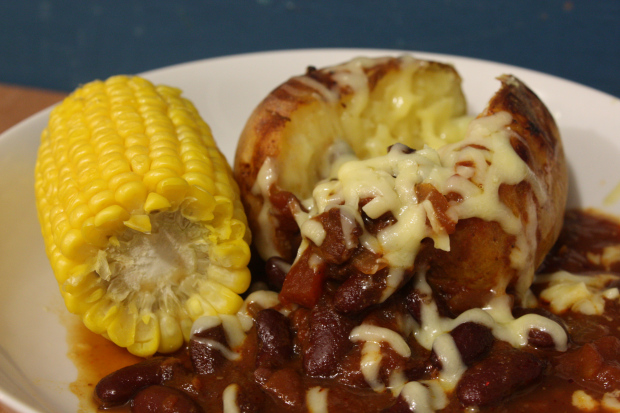 Cooking with dried beans is something I associate with vegans or smug people with pressure cookers. I fall into neither of those categories. But I have eaten beans cooked from scratch, and so am aware that their texture is far superior to tinned beans which have been sitting in a brine.

For this week’s Telegraph column I decided to perfect a cowboy bean recipe, which used liquid smoke. Cowboy beans are something I have cooked often before. Though I’m ashamed to say that I have always used tinned beans in the past….

I decided that this was the perfect opportunity to start experimenting with dried beans, and to do things properly.

Now, the first step of using dried beans is to be organised enough to anticipate when you’re going to want to eat them, and to soak them overnight. This sort of foresight totally eludes me, so instead, I looked up a cheat’s technique. Covering the beans in water, bringing the pan up to the boil, and then letting the beans soak in the hot water has the same effect. After an hour, the beans had rehydrated and looked like they were ready for cooking.

The next part of the bean-cooking story serves as a fable: always read about a new ingredient when you’re cooking with it. Rather arrogantly, I assumed that the purpose of cooking a bean was to continue to rehydrate it, and to heat it through. “Hell, it may as well do that in the tomato sauce” I thought - assuming that the beans would soak up all the flavoursome tomato sauce in the pan, improving their taste.

Oh, how I was wrong. After an hour and a half of cooking, the kidney beans were still hard little pebbles studding an (otherwise delicious) sauce. I went to online bean cooking forums to investigate further. So, it transpires, that you’re not even advised to cook beans in salted water. They may look robust - but it turns out that dried beans are such sensitive, precious little things, only pure water will do.

So, I went back to the drawing board for cowboy bean version two, boiling the beans separately to sauce, and combining the two at the end. the  It’s actually not too much of a fuss, because the beans take a similar amount of time to cook as the sauce. But it does mean that this ‘one pot dish’ needs cooking in two pots on two hobs. Not so cowboy…

I fear that I’ve made this dish sound like more of a hassle than it is. It really is quite simple. I urge you to make a big batch of this at the weekend, and then freeze any leftovers you have to microwave on a week night when you can’t be bothered to cook. It’s seasonal and warm and comforting. Delicious with baked potato and cheese, or with (pulled) pork, or just in a soup bowl by itself.

1. Drain the soaked kidney beans and rinse them under cold water. Put them in a pan, and cover with water. Bring to the boil for 10 minutes, and then simmer for an hour.

2. Meanwhile, start to cook the bacon in a casserole dish. Add the onions, and cook until they begin to turn translucent, and the bacons starts to crisp. Add a little oil if needed, and then stir in the garlic and chilli and cook for a further three minutes.

4. Add one teaspoon of liquid smoke. It can be powerful stuff, so stir it in and taste the sauce before deciding whether to add another teaspoon.

5. Allow to simmer for 1.5 hours. Meanwhile, drain the cooked beans, and then add them to the sauce at the end of cooking.

6. To serve, ladle the beans into a baking dish, grate cheese over the top, and allow to melt under the grill for two minutes. 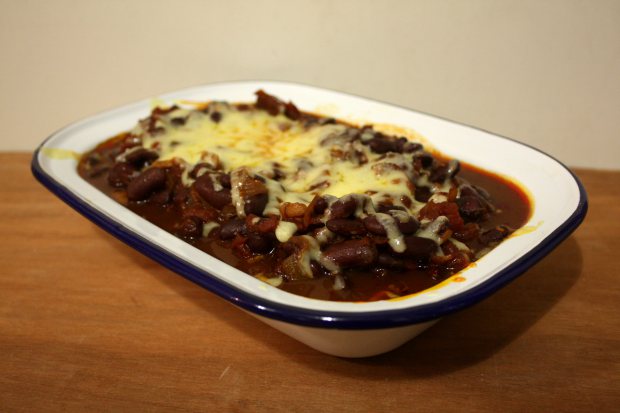