Dear readers, I apologise that it has taken me since Burns Night to construct a post – but I’m afraid that I’ve been busy indulging in my second-favourite pastime (second to this blog, of course): coming up with some devastatingly cunning business plans.

I figured that if I come up with enough ideas, then one of them might grow into a tiny kernel of a plan that could actually be worth pursuing—a similar sort of logic to an infinite amount of monkeys with an infinite number of typewriters eventually writing the works of Shakespeare.

The thing that makes it so tricky is that everything worth inventing has already been invented.

But I bet that everybody said the same thing back in the 1950s. Then along came ring pulls and packets of crisps and disposable nappies—and frustrated inventors and businessmen were kicking themselves for not coming up with such an obvious idea sooner.

It is particularly hard to think up groundbreaking ideas for the food industry though. The niche for catering companies has been plugged; food PR companies are well-established; dammit, I was about four years late with my food blog.

But this is a defeatist attitude. There’s always something new round the corner. I just need to work out what it is.

I was shocked (as some of you might also be) to discover that I spent a full five years on this earth (1991) before some bright spark uttered the word: ‘gastropub’. Who would’ve thought that restaurants and pubs could co-exist for so many centuries side by side without somebody thinking of combining the two?

The pub in question was The Eagle in Clerkenwell, which is still running off the concept of real ale and good food, picked off hand-chalked blackboards, within racing green and wooden interiors: a piece of the country in a corner of the city. Informal. Appealing to men and women. And worth the money people pay.

But since the explosion of gastropubs, not everybody has been so loyal to the concept. At one end of the market is The Gastropub that heats up an Iceland’s pizza and charges you a tenner, and at the other end of the market is The Gastropub which refuses to sell you a pack of salt ‘n vinegar to stave off the tipsiness of post-work wine – and bullies you into parting with a tenner for a porcelain potful of hand sculpted scratchings from happy, fell-walking, scrabble-playing pigs.

It’s all very well jumping onto the bandwagon that was (and still is) ‘gastropubs’, but to do it at a good time, expand at the right rate and stay loyal to the dream is a true skill….which leads me neatly onto the subject of Renaissance Pubs.

The Thursday before last I was lucky enough to be invited on a food bloggers’ tour round four of the six pubs set up by friends Tom Peake, Mark Reynolds and Nick Fox. Round the first boom of gastropubs the three foodies started dreaming up a plan, which started with Cinnamon Cay – a neighbourhood restaurant in Battersea which they launched in 2000.

In 2002 they opened the first of their current group of gastropubs: The Abbeville. After that they caught the bug of converting sizable, but unloved buildings round the Clapham area into beautiful businesses with carefully chosen ales, wine and food.

There are no shortcuts in the Renaissance pub chain. The executive chef Masimo Tebaldi has the sort of passion and knowledge that only comes from a lifetime infatuation with food: bred into him from birth, nurtured through a childhood spent in a Genoan pastry shop, and finally realised when he moved to South London and became a key part of the developing chain.

The design of each gastropub is carefully thought-out and tailored to fit the individual buildings – from the wood, leather and different levels which bring a casual and more intimate feel to the vast space that is The Tommyfield, to the sepia newspapers printed directly onto the white tiled walls at The Avalon. The meat comes from a friend’s Hampshire farm and is butchered on site, and the super wine is not, by any means, an accidental choice.

Bar at The Avalon

And then the food – oh the food. It’s hard to hone in on any specific pub, because they all have different head chefs with different strengths, and we ate a different course in a each pub, (whizzing between in a taxi—not advisable for the frugal, but great fun nonetheless).

The standard was consistently excellent. Exciting, masterly cooked and beautifully presented. A real treat, but nothing too fancy: drinks with friends, lunch with parents, dinner with a date – the Renaissance pubs are a buzzy but a safe bet for pretty much any occasion – surely the exact aim for the original gastropub.

In the business section of lastnight’s Evening Standard was a feature on Dessislava Bell – she wanted to lose weight, so wrapped her legs in cling film while she exercised to produce extra sweat or something. The point is that she turned the clingfilm cyclepants into something more socially acceptable that produced the same results and now she’s earning millions.

I’m constantly in awe of people who found that gem of a business, pursued it and nailed it. And I think this is why I loved Renaissance pubs so much. It was great eating there. And even better being able to dream that I might, one day, be able to spot the ‘next gastropub’ trend, and execute it as beautifully as Tom, Mark and Nick have.

What I ate, and where (apologies that the photos don’t do any of this justice—I must get better!): 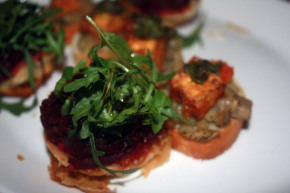 Nb. I’m not the biggest fan of churros…but as I type this, I find myself drifting back into the dreamy trance this pudding created. If you go to The Avalon (which was my favourite pub of the night), then I whole-heartedly recommend this pudding. It’s phenomenal.
Once again, I apologise that the photo doesn’t do it justice. I have focused on the pudding wine rather than the pudding. Which I think is an ample explanation in itself.