That’s a photograph of me on holiday in Portugal. I’ve just discovered nectarines, and the look says it all. ‘Please don’t take it away’, my eyes plead, as my fingers dig into the nectarine flesh, squelching the juice down my chubby baby arms. Whoever put a plate in front of me was being very optimistic.

A ripe nectarine is a beautiful thing. A somewhat superior fruit without the furriness of a peach, and twice as juicy as an apricot. In many ways, they’re best cut into slices, and enjoyed segment by segment.

But I wanted to share this recipe, because it puts together some unusual, and really lovely flavours. It’s a great dessert for feeding people en masse, and can easily be scaled up or down.  The recipe I’ve listed below is for thirty - simply because that’s how many mum and I were catering for this weekend - and is the amount depicted in the photographs below.

I’m not usually a fan of boozy puddings. This isn’t ‘boozy’ like a trifle drowning in sherry though. The amaretti biscuits and small slosh of brandy just give the dessert a sophisticated edge, making these baked nectarines the perfect way to finish off a slow, summer supper. 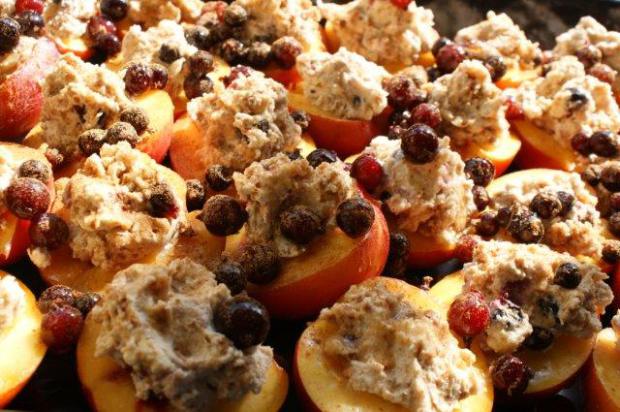 A prepared tray of nectarines, before baking.

1. Cut the nectarines in half, remove the stones, and arrange them (flat side up) in a baking tray.
2. Put the amaretti biscuits in a large mixing bowl, and use the end of a rolling pin to pound them into crumbs.  Stir in the mascarpone, brandy, 50g of the blackcurrants, and a pinch of cinnamon.
3. Now pick up a walnut-sized lump of the mixture, and squash it into the hole where the nectarine stone was. Repeat until all 30 of the nectarines contain a lump of the amaretti-mascarpone mixture.
4. Sprinkle the remaining blackcurrants, cinnamon and honey over the tray of nectarines.
5. Bake the nectarines at 180C for 20 minutes, and serve with a little creme fraiche. 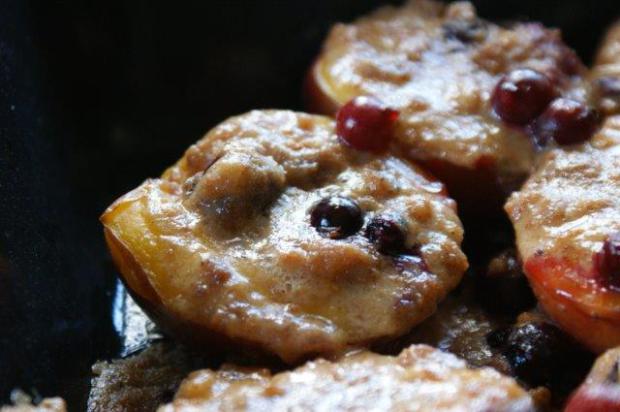 Baked nectarine: serve one or two halves per person, with a blob of creme fraiche 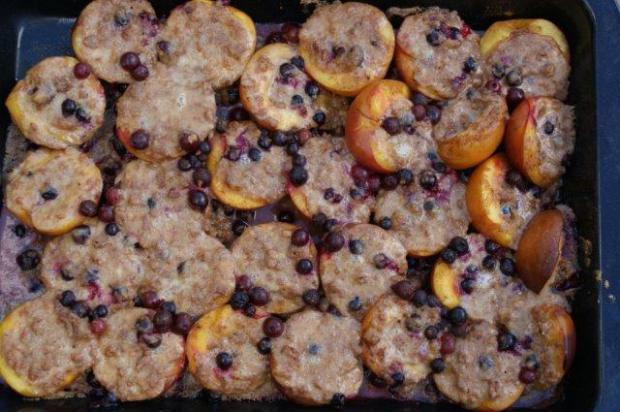 Easy to prepare. Easy to cook. Easy to serve.