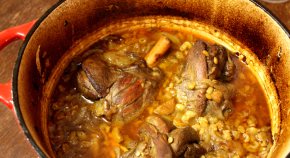 I’ve been to Morocco twice. The first time to Agadir. I was thirteen and we went to a an all-inclusive hotel which mainly included morning battles over sunbeds. I don’t want to seem ungrateful, but my memories of the somewhat sketchy week is miles away from the glossy images you see.

The second time I went was in my last year of university. A couple of girl friends and I decided to get some winter sun. “The sun shines 300 days a year” - so the Moroccan tourist board says. Only we didn’t consider the other 65 days. Mid-December, we rooted out some summer dresses, flip flops, sunglasses and off we set.

The thing about Morocco is that it’s not really designed for the few weeks of cold it experiences each year. Riads are built round open courtyards, often with un-glassed windows to help keep the rooms cool. Tiled floors and plain white walls work well in the scorching summer. But they’re pretty nippy in December. 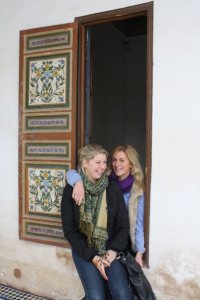 Huddling for warmth in Morocco

I don’t think that I had the classic Moroccan experience either time, but the one thing that hugely endears me to the country is its wonderful cuisine. This week I’ve been playing with ras el hanout - a Moroccan spice blend, kind of like a North African garam masala. I used the Spicentice ras el hanout which was wonderful - rose petals, cardamom, cumin, cassia and lots more - but I shall save my love for Spicentice for another post to come soon. You can, incidentally pick up ras el hanout in most big supermarkets - Sainsburys and Tescos have their own brand, and Barts Ingredients added ras el hanout to their line back in 2008.

The dish below is really delicious. It tickled Tom that the addition of pearl barley turned it into a Scottish-Moroccan fusion. Something that brought back memories of a party his mum threw, which was a Scottish-Moroccan theme. A frenzy of tartan and leather slippers.

As with all slow-cooked dishes this is crammed with flavour. The ras el hanout isn’t spicy, but savoury-sweet and aromatic and beautiful. after a couple of hours of cooking, the meat falls off the bone, and the marrow seeps into the sauce making it sticky and delicious. Lamb shanks and pearl barley and kale are all lovely and cheap, so there’s no excuse not to give this a go.

1. Rub the lamb shanks with the ras el hanout. Heat the oil in a heavy bottomed casserole dish, and brown the lamb shanks - turning them in the oil for a couple of minutes. Remove from the pan and put them to one side.

2. Cook the onions in the now-flavoured oil, until they start to turn translucent - about five minutes. If they are sticking in the pan, add a little more oil. Add the garlic to the pan and cook for a couple more minutes.

3. Return the lamb shanks to the pan. Cover with the lamb stock, add the dried apricots, put on the lid and the put in the oven at 160C for 1.5 hours.

4. Rinse the pearl barley in a sieve under the cold tap, and then add to the liquid, making sure it’s all fully-submerged. Return the casserole dish to the oven for 1 hour more.

5. To cook the kale, boil 2 inches of water in the bottom of a pan. Put the kale in the pan, put on the lid and blanche for 2 minutes. Drain.

6. While the kale is blanching, heat the butter in a frying pan. When it’s foaming, put the now-drained kale in the frying pan, stir for a couple of minutes and then season with salt and pepper.

7. Divide the kale between three shallow bowls. Use a couple of forks to dole out the lamb shanks, and then ladle the lovely, juicy, pearl barley, spiced broth in the dish.