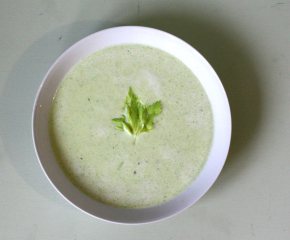 For those of you who have clicked through to this recipe for celery soup, congratulations for your open-mindedness.

It’s a tricky one, celery. Lots of people take a bite of a raw stick of celery, wince at the bitterness and disregard it from then onwards. But when celery is cooked, its flavour changes entirely. Celery is a great enhancer, and enriches dishes - from soups to ragu to pie fillings. So when a recipe calls for celery, I never skip it out. It rarely makes the dish taste of celery, but it adds a definite depth.

The problem is that these recipes only usually require one or two sticks. Celery is sold as a bunch though, which means that there’s a lot which gets left behind - lingering in my fridge until the celery sticks lose all rigidity and get binned.

Last week I made pearl barley soup, and the leftover celery has been taking up fridge space ever since. So today I decided to do something about it, and I turned it into…you’ve guessed it, another soup. Because celery is so unusually low in calories, I figured that it was ok to use an unusually large amount of butter, as well as some creme fraiche, to turn this into a really deliciously creamy and elegant soup for a cold and wet Wednesday.

1. Heat the butter in the pan, add the celery and soften for 10-12 minutes
2. Cook the garlic for another couple of minutes, and then cover with chicken stock.
3. Add the creme fraiche, blend, and season with salt and pepper.