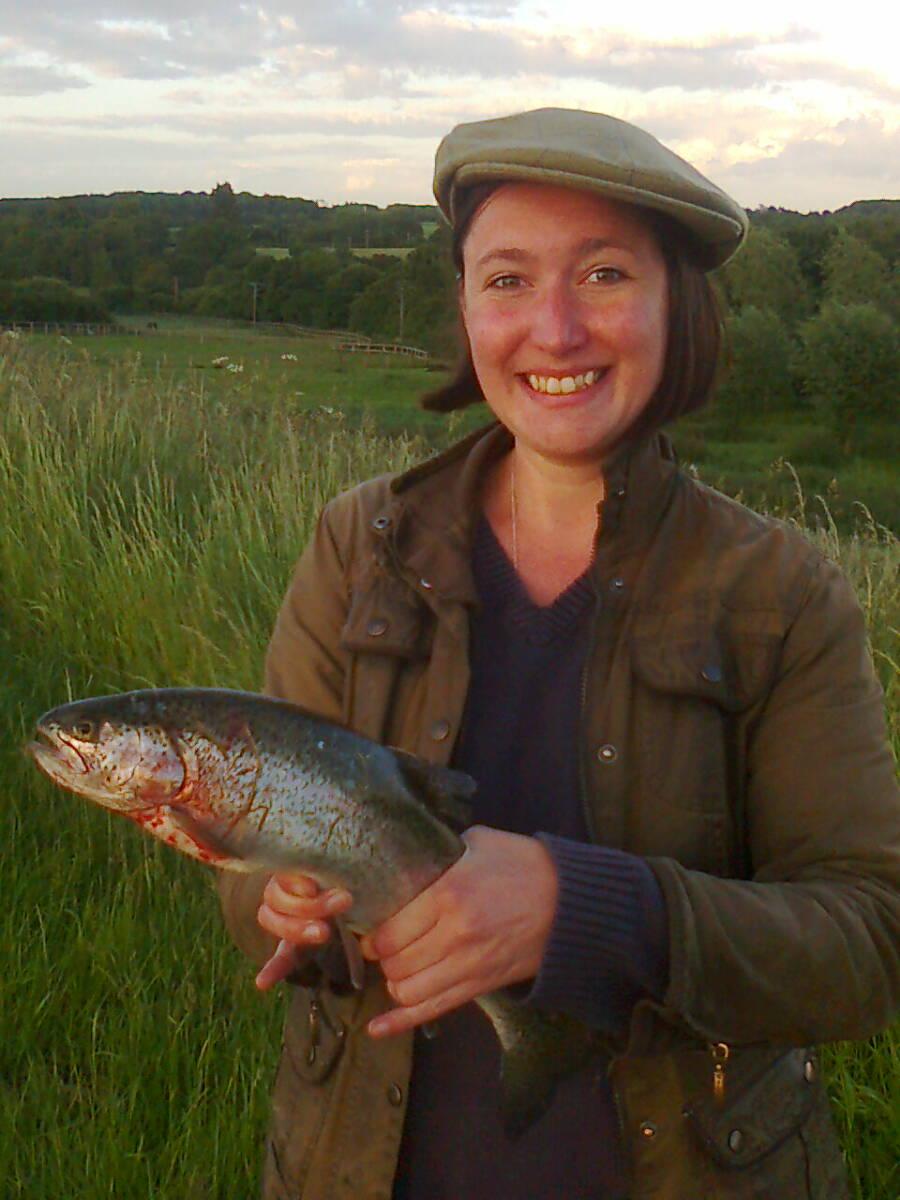 A remarkable thing happened this weekend. I killed an animal. Now let me say straight off - I have nothing whatsoever against the killing of animals. Just as long as it isn’t me who has to do it.

Indeed, many times I’ve been a accomplice when it comes to the killing of things that run or fly or swim. After all, I am a voracious meat eater, so it would be hypocritical not to show at least a keen interest. I’ve whooped encouragingly if somebody pops-off a rabbit, and have enthusiastically beaten birds towards somebody wielding a gun - licking my lips at the thought of supper.

But when it comes to the actual execution, I’m nothing but a shameful coward.  Somebody was once brave - or stupid - enough to give me a gun on an occasion where there were droves of birds whistling overhead. Everything happened very quickly. I remember frantic loading and pulling the trigger a lot. But I certainly don’t remember actually aiming at anything. Once the onslaught was over, some old military boy stood nearby made a remark about how it was “like The Somme”. Only I looked around me, and there were about 30 empty cartridges, and not so much as a feather on the ground.

The only other occasion I’ve been holding a gun, as luck would have it a myxomatosis-riddled rabbit lolloped out of the wood. “Kill it!” Shouted my boyfriend’s younger brother - somewhat consumed by blood lust. Trembling a little, I drew the gun up to my shoulder, and continued to fire off cartridges in pretty much every direction other than the entirely sedentary rabbit. Eventually, the gun was confiscated, and the rabbit was duly “put out of its misery”.

Anyway, I digress. I’m resigned to the fact that I’m never going to be a “good shot” (or even any ‘shot’ whatsoever) - but I’ve always secretly thought that fishing might be my sport. Sitting, pondering, pontificating, procrastinating and occasionally plucking a big ol’ tasty fish fish out of the water. Or so I thought.

The weekend before last we went to stay with Tom’s godmother. Well, I was under the impression that she was his godmother, but half way through the weekend, it emerged that she was wasn’t exactly a godmother in terms of being there at the christening, but more someone adopted along the way. The conversation was so wonderfully boozy though that whenever somebody was about to explain the story behind it all, they shot off down another entertaining tangent. So I’m still none the wiser. Anyway, the point was We Went Fishing.

The sun was setting, a bottle of wine was open, and Tom’s Godmother Maggie was trying to explain the science behind ‘casting’. Quite amazing how the simple act of putting a hook in the water can be quite so tricky. I spent most of the time untangling it from the long grass behind me which it got caught in every time it whooshed over my head - or tugging it out of weeds on the odd occasion that I got it into the water.

“Fish,” he said, “I love you and respect you very much. But I will kill you dead before this day ends.”
― Ernest Hemingway, The Old Man and the Sea

But after a while, the percentage of the time that the hook spent in the water began to outweigh the amount of time it spent in the long grass. And slowly the fly started plopping slightly further away from the bank - until it was, well, at least  two or three feet away. So it was quite remarkable that there happened to be a trout who was - firstly, stupid enough to be swimming in such shallow water and, secondly, stupid enough to mistake the moss green feathery ‘fly’ as an actual insect sitting on the lake. Darwin’s Theory in action, sort of.

“Keep the tip up!” shouted Maggie - as the trout writhed about. “Let it tire” she said - as I rather inelegantly stood on my tippitoes holding the rod above my head in an effort to ‘keep the tip up’… thinking how similar the whole experience was to The Old Man And The Sea - hoping and praying that the trout would tire before I did.

As luck would have it, it did. And the trout was scooped out in the water before I embarrassed myself too much with a loose line, or a sudden collapse, or an unexpected and overwhelming bout of sympathy for the trout. Delight, utter delight!

The only sadness was that after such a heroic exhibition of my new-found fishing prowess, I tried to pick up the trout to hold it aloft, while it was in the midst of post-death-spasms. Lots of screaming and dropping . Not such impressive stuff. But by the evening, two rainbow trouts were safely installed in the fridge in Bethnal Green, and I was enjoying a slice of The Good Life. 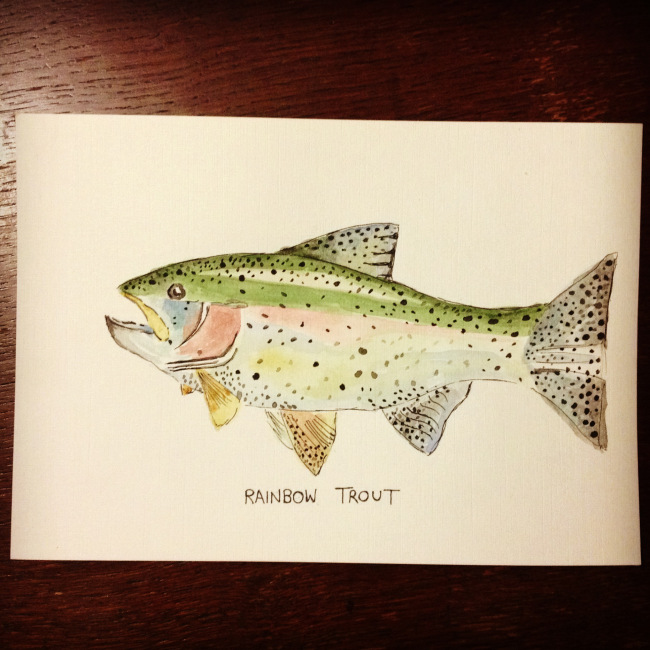 I have no photographic evidence of the fishing, or indeed the fish, or Monday night’s supper. So I painted a watercolour (see above) which should be sufficient proof as to just how big and delicious the trout was*. And I shall describe Monday night’s supper regardless. I oven-poached the trout (a method which doesn’t require a poaching kettle) - inspired by a recipe in Hilferty & Norrington-Davies’ Game: A Cookbook. I filled a roasting tray with boiling water, and put it in the oven at 180C so it created a lovely humid, steamy environment. I then put slices of lemon in the trout’s belly, wrapped it in baking parchment, and put it the oven on the level above the tray of hot water for 20 minutes. The result was a deliciously moist fish, which I served with Delia’s Foaming Hollondaise sauce and steamed curly kale. 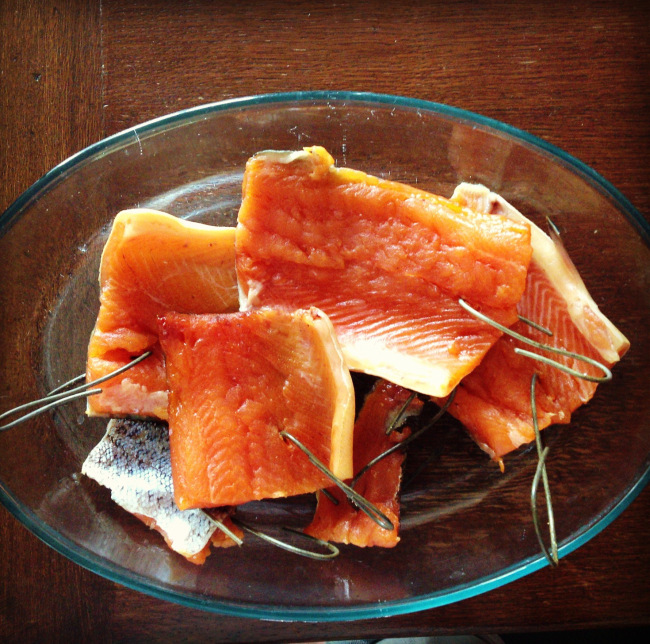 The second trout went into the cold-smoker (see above). For those of you who have been kind enough read this blog before, you may remember the salmon smoked with oak chips. I smoked the trout in exactly the same way (salt-curing it for 8 hours, drying it in the fridge for 12 hours, and smoking it overnight) - but I used hickory smoke, and for some reason it tasted a lot smokier. I’m not yet sure if this is because of the type of fish, the thinner fillets or the change of smoking chips. But I will keep on experimenting, and keep you updated with the results.

In the meantime, I must finish this exceedingly long post by reiterating the brilliance of smoking fish. Not only because you wake up to the most beautiful smoked-wood smell wafting through the window, but also because it means that the fish keeps better for longer. I am still enjoying the trout. Both as the most luxurious packed lunch (see below: with biona organic amaranth/quinoa rye bread, sour cream, Moroccan couscous and cherry tomatoes), and also in savoury tartlets (see below: 100g smoked trout cut into pieces, 3 egg yolks, 1 whole egg, 120ml sour cream, 1 teaspoon horseradish, juice of 1/2 lemon, zest of 1/2 lemon, pepper, smoked salt - mixed together and put in blind-baked short crust pastry cases). 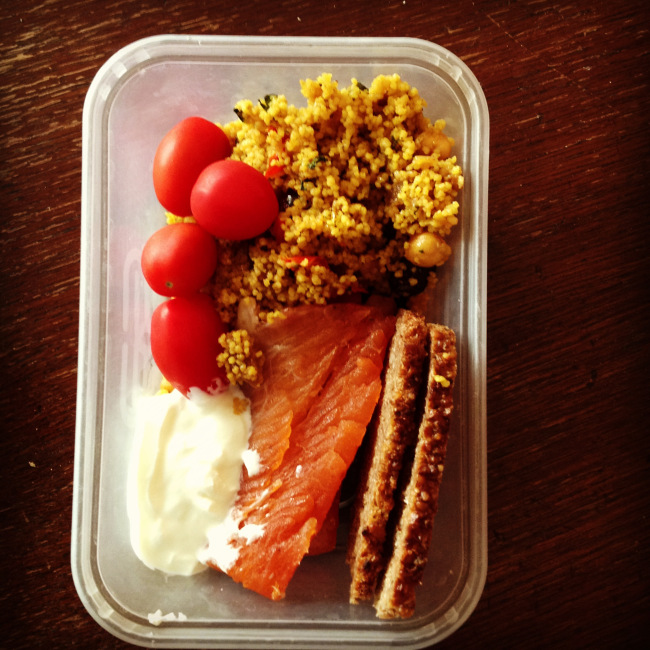 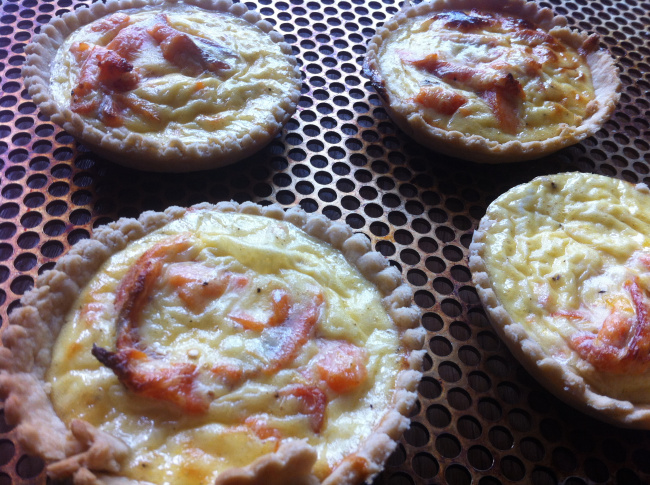 * I have since retrieved a photo - meaning the watercolour is now unnecessary…but I thought I’d keep it in the post anyway.